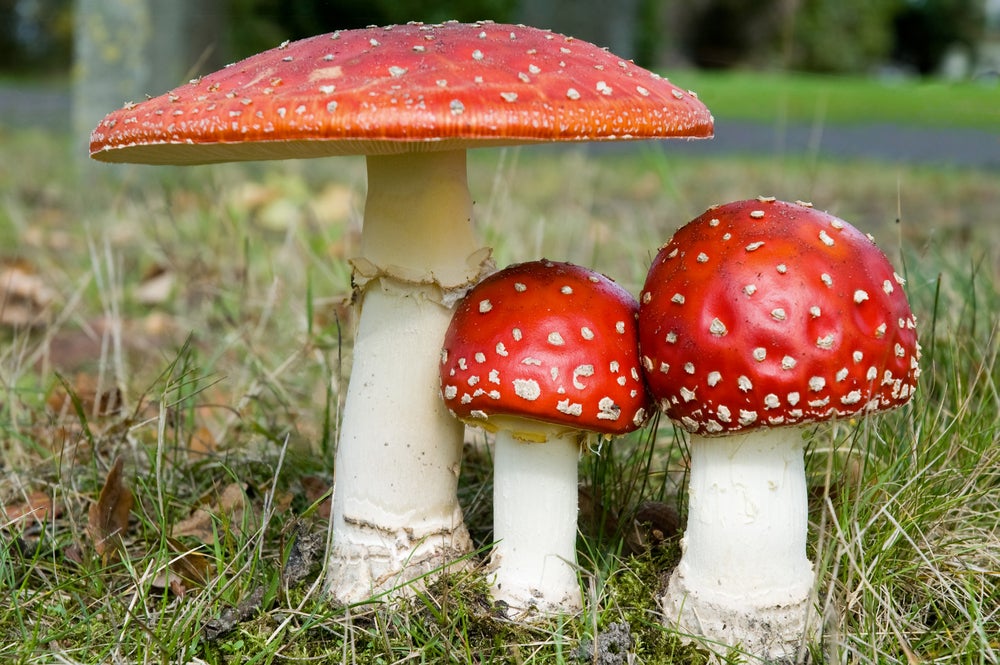 Like May toadstools sprouting after an April rain, three new published Review Department decisions appeared together on the State Bar Court's website on or about May Day.  Only one (In the Matter of Amponsah) is recent, filed April 22, 2019; the other two (In the Matter of Chance Gordon and In the Matter of Gonzalez) were filed last fall.

Exactly what determines when a published decision will appear on the State Bar Court's website is a little mysterious. Gordon and Gonzalez are disbarment cases and the State Bar Court may have waited until the California Supreme Court acted on its disbarment recommendations before publishing their decisions. The recommendation in Amponsah is a one-year actual suspension, with a two year stayed suspension and probation. At this writing, it has not yet been transmitted to the high Court.

The real fun for those who follow the State Bar Court is figuring out why these decisions were deemed worthy of publication.  Publication gives the opinion precedential value in State Bar Court under State Bar Rule of Procedure 5.159.  Subsection E describes the criteria for publication:

(E) Criteria for Publication. By majority vote, the Review Department may designate for publication an opinion which:

(1) Establishes a new rule, applies an existing rule to a set of facts significantly different from those stated in published opinions, or modifies, or criticizes with reasons given, an existing rule;

(2) Resolves or creates an apparent conflict in the law;

(3) Involves a legal issue of continuing interest to the public generally and/or to members of the State Bar, or one which is likely to recur;

(4) Makes a significant contribution to legal literature by collecting and analyzing the existing case law on a particular point or by reviewing and interpreting a statute or rule; or

(5) Makes a significant contribution to the body of disciplinary case law by discussing the appropriate degree of discipline based on a set of facts and circumstances materially different from those stated in published opinions.

Most Review Department decisions don't make the cut and are unpublished and not citeable as precedent.  Any given observer might read one of those decisions and conclude that it would fit within the criteria established by the Rule 5.159(e); clearly, selection reflects an exercise of the Review Department's discretion.  Its collective mind can be changed, and Rule 5.159(h) allows “any person” to request publication of a decision or to request depublication of a decision.  Unpublished decisions have become published at the request of the Office of Chief Trial Counsel (OCTC), e.g., In the Matter of Nasser, as well as the Association of Discipline Defense Counsel, e.g., In the Matter of Yee.  Gordon and Gonzalez may have been originally unpublished opinions subject to such a request; the current unavailability of the State Bar Court on-line docket makes it impossible to confirm that now.

The Gordon decision is truly a toadstool and a highly toxic one at that.  The Respondent engaged in nationwide loan modification practice in partnership with a non-lawyer that included the mailing of many misleading direct mail letters, some seeming to come from the Department of Housing and Urban Development, the use of a number of different entity names and websites, and the collection of $11.4 million in advanced fees from from more than 2,000 in violation of Civil Code section 2944.7.  The Consumer Finance Protection Bureau (CPFB) obtained a permanent injunction against Mr. Gordon in 2012 shutting down the operation. The Office of Chief Trial Counsel, in one of the infrequent applications of its power to seek interim remedies under Bus. & Prof. Code section 6007(c), obtained an order for his involuntary inactive enrollment from the State Bar Court in November 2012, based on the CPFB's injunction as well as a large number of client complaints.

The misconduct was serious, probably serious enough to justify disbarment given the lack of mitigating factors and several aggravating factors.  But the icing on Mr. Gordon's cake was a weighty aggravating circumstance: his multiple threats against an OCTC investigator and prosecutor.  Based on these threats, the prosecutor obtained restraining orders against Mr. Gordon.  The Review Department spends three pages of the decision describing these threats in detail.

The scope of the egregious underlying conduct and the serious aggravating circumstances would seem to fit comfortably within Rule 5.159(e)(5) by furnishing a significant contribution to disciplinary case law materially different than prior case law.  After discussing its prior published discipline cases involving loan modification misconduct, the Court states that

While the loan modification cases discussed above provide guidance, this case is unique.  Due to the scope of Gordon's scheme and the egregious aggravation, our recommendation may go beyond the discipline recommended in a typical loan modification case.  (See In re Morse [(1995) 11 Cal.4th 184] at p. 207 [scope of attorney's misconduct necessitated court go beyond recommendations in other false advertising disciplinary cases].)

The citation to Morse is significant because of Morse's procedural history.  Mr. Morse engaged in a massive direct mail solicitation effort (over four million mailers) to persuade homeowners to hire him to file statutory homesteads with a deceptive mailer designed to look like it came from a lender. The subject California Attorney General and the Alameda County District Attorney filed a successful action against Morse in for an injunction to halt his operation, upheld on appeal.  Nonetheless, the Review Department, based on precedent, recommended only a 60-day actual suspension.  The Supreme Court found this wanting and ordered discipline including three years of actual suspension.  Moreover, it chided the State Bar Court for being overly dependent on its analysis on decisions whose facts were less serious.  The Supreme Court articulated the inquiry this way:

These decisions provide some guidance, but our determination of the appropriate discipline ultimately depends on the answers to two key questions. First, what did Morse do wrong? Second, what is the discipline most likely to protect the public, the courts, and the profession, or stated conversely, to deter Morse from future wrongdoing?… Morse also appears unwilling to accept any meaningful discipline. The hearing judge recommended only a 15-day actual suspension, an exceedingly light sanction. Rather than count his good fortune, Morse felt wronged, arguing to the review department that the suspension was excessive. When the review department increased the actual suspension to 60 days, still a minor sanction, Morse sought our review.

Morse is a “correction” decision and its impact wasn't limited to Mr. Morse.  The presiding judge of the State Bar Court, who sits in the Review Department, and the Hearing Judge in the matter were not re-appointed.  OCTC prosecutors (including me) felt emboldened, and the office began to focus on appellate advocacy in the Review Department.  Gordon has more than a passing similarity to Morse. Both cases show that while precedent is important in State Bar Court, it isn't as important as it might be in other courts.  Of course, the test articulated in Morse is simple but somewhat circular since figuring out the appropriate discipline is what its all about anyway.

Gonzalez is a duller and sadder affair.  Mr. Gonzalez, admitted in 2002, was disbarred on his third strike since 2011. The first discipline involves failures to perform, to communicate, to account for fees and to return client files that began in 2005.  Mr. Gonzalez failed to fulfill the conditions attached to that discipline and was disciplined for that in 2012.  The third strike involved both client misconduct similar to the first discipline and a failure to comply with California Rule of Court 9.20, the rule requiring notice of suspension to clients and others, among other things.

The Hearing Judge recommended an actual suspension of two years and until restitution was made to the clients, based on the judge's reasoning the misconduct in “Gonzalez II occurred after much of the present misconduct.” (See In the Matter of Sklar (Review Dept. 1993) 2 Cal. State Bar Ct. Rptr. 602, 619: weight of aggravation for prior discipline record depends on whether attorney had the opportunity to heed import of prior proceeding before committing misconduct at issue.)  The Review Department disagreed, finding that “Gonzalez committed most of his present misconduct in 2011 and 2012, when he knew of both prior discipline cases.”  Standard 1.18 suggests disbarment on the third strike unless compelling mitigation can be shown. The Hearing Judge assigned significant mitigating weight to the stroke Mr. Gonzalez suffered in 2012.  Again, the Review Department disagreed, finding that the expert medical evidence did not show “clear and convincing” causation between the medical problems and the misconduct.

Gonzalez may be useful precedent on the application of Standard 1.8 and the quanta of evidence necessary to establish causation for medical problems.  But it doesn't stand out brightly against the unpublished decisions that apply the same sort of analysis, for instance In the Matter of Na, which also discusses Standard 1.8 but comes to a different result, two years actual suspension.  If OCTC asked for this case to be published, I would love to read their argument.

Amponsah is a “second strike” case where OCTC sought disbarment for a failure to comply with California Rule of Court 9.20 and violation of two probation conditions. Case law says that disbarment is the presumptive discipline for failing to comply with Rule 9.20.  Mr. Amponsah was able to show that he made unsuccessful attempts to comply with the Rule and the emotional difficulties he suffered after the imposition of prior discipline played in role in his failure to timely comply.  Moreover, no client was harmed and he admitted his culpability. The Hearing Judge found “suspension rather than disbarment is appropriate because [Amponsah's] misconduct is not indicative of his ability to conform to ethical norms” and recommended an actual one-year suspension.  The Review Department, in the exercise of its de novo review (see Rule of Procedure 5.155(a)) weighed the mitigating factors a little differently but adopted the same recommendation.

Amponisah has presidential value in its analysis of the mitigating factors.  OCTC sought disbarment below and, losing, appealed the case. Publishing the decision might be a signal to OCTC discouraging appeals where the record establishes appropriate mitigation.

This isn't specifically provided for in the rules but in the relatively small world of disciplinary jurisprudence, but it is within the discretion of the Review Department hinted at in Rule 5.159(e).

But the nature of that small world points up a seeming contradiction in the use of Review Department decisions as precedent.  OCTC lawyers, defense lawyers, and Hearing Judges are all going to be reading (or should be reading) both the unpublished and the published decisions to understand how the Review Department is analyzing issues and taking guidance from them.  The Review Department gets to choose (by majority vote) which decisions will be used in the future, but not which arguments.  Unpublished decisions may play a bigger role in discipline jurisprudence than in civil court, a role not obvious, making the publication status both important than it seems, but also pointing up the publication is a decision made by the Review Department for its own reasons, some that might not fit completely within the confines of the Rule.